International Rally: A Socialist Planet for the Needs of All – Our Fight, Our Future 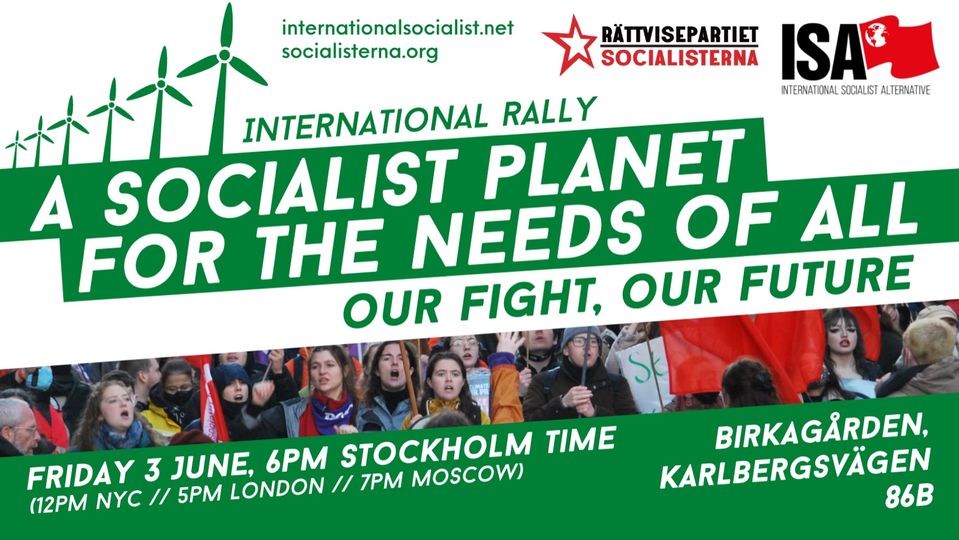 – Katja Raetz. Healthcare union representative and nurse who has called upon her union to take a stance and put pressure on politicians with regards to climate

– Myriam Poizat: From the Socialist Party (ISA’s Irish section), on how anti-racism, feminism, workers’ struggles are linked to the climate movement

– Mattias Bernhardsson: Campaign organizer for “Preserve the forests, archipelago and cultural landscape of Haninge” and number 1 on the election ballot for Rättvisepartiet Socialisterna in Haninge

– Arne Müller: Writer and journalist who has written extensively about the exploitative mining industry and energy politics, particularly in Northern Sweden

– Yaara Cliff: from Socialist Alternative (ISA in England, Wales & Scotland who will talk about ISA’s climate engagement around the world

With the Stockholm+50 Climate Conference taking place on June 2-3, climate campaigners, youth, trade union activists and many others will be demonstrating on June 1 & 3 to send out a clear message – WE ARE THE CHANGE that you refuse – whether you like it or not!
The protests will be followed by our internationally rally at 6PM that you can attend in person in Stockholm or via zoom.
After 50 years of UN conferences on the environment, the situation is worse. Climate disaster, plastic pollution, loss of biodiversity and mass extinctions – the past decades of capitalist “climate and environmental management” have brought humanity ever closer to the abyss.
However, there is reason for hope. An international climate movement of youth, workers, Indigenous people, farmers and poor people are capable of overthrowing this deadly capitalist system and replacing it with an egalitarian and democratic socialist system.
International Socialist Alternative is dedicated to building the movement to end capitalism and provide a future for humanity. As part of this struggle ISA is helping to organize and mobilize for the climate protests taking place on June 1 & 3 in Stockholm including an international climate contingent from ISA sections outside of Sweden.
More info about ISA: https://internationalsocialist.net/en/
#PeopleNotProfit #UprootTheSystem #ClimateRevolution